I do love to read a good plaque as I wander around the streets of London, camera in hand. It’s like having a mini-history lesson laid out for you as you take a path, walked by thousands of people before you. They help us connect our present to the past. They also help us enjoy the living fiction of a fabled London Victorian consulting detective at 221b Baker Street!

The most prolific plaques however are those erected under the current stewardship of English Heritage.

When did they start? Well, it all started back in 1866 when the first plaque was unveiled linking the people of the past with the buildings of the present. The scheme was originally administered by the Royal Society of Arts from 1876 to 1901 and was subsequently taken over by the London County Council (LCC) from 1965, The Greater London Council (GLC) from 1965 to 1986 when that body was abolished and finally English Heritage who hold that role today.

It’s thought that the Blue Plaque scheme, honouring London’s notables, is the oldest programme of its kind in the world. Across the capital over 900 plaques, on buildings humble and grand, honour the notable men and women who have lived or worked in them.

Are they always round & blue? Apparently not but you can spot them by looking for the name of the organisation that erected them. Many other bodies, such as local councils, also put up commemorative plaques in London, using different criteria.

What was the first plaque? It was installed in 1867 to honour the last French Emperor, Napoleon III. Today, the rule is that to be awarded a plaque, a recipient must have been dead for 20 years, but Napoleon was still ruling France when his went up. The French imperial eagle is part of the plaque’s design. Apparently Louis Napoleon left his London home in King Street, off St James’s Square, in a great hurry – his bed unmade and his bath still full of water – to return to France when he heard of the overthrow of King Louis Philippe in 1848.

What was the first blue plaque? The first blue plaque was awarded to the poet Lord Byron in 1867, but his house in Holles Street, near Cavendish Square, was demolished in 1889. A John Lewis department store occupies the site today, and bears a Westminster City Council plaque to the poet. This replaced an earlier, non-standard, plaque in 2012, which in turn succeeded a plaque lost when John Lewis was bombed in the Second World War. Recent research has revealed that there is no clear evidence to show which house in Holles Street Byron actually lived in – raising the intriguing possibility that none of Byron’s plaques, past and present, has actually marked the correct spot.

Why do some houses have two plaques? It’s unusual for houses in London to bear two official plaques, but there are currently 18 cases of double commemorations. Examples include 20 Maresfield Gardens (Sigmund Freud and Anna Freud) and 29 Fitzroy Square (George Bernard Shaw and Virginia Woolf).

Famously, Jimi Hendrix and George Frideric Handel have plaques on neighbouring houses in Brook Street, Mayfair. When asked about living next to Handel’s old home, Hendrix is reported to have said, ‘To tell you the God’s honest truth, I haven’t heard much of the fella’s stuff.’

There are also some people who have more than one plaque. Mahatma Gandhi has two: one on Baron’s Court Road, West Kensington, where he lived as a law student, and the other in Powis Road, Bow. The Prime Ministers Lord Palmerston and William Gladstone each have three surviving plaques, as does the author William Makepeace Thackeray. In recent years the rule has been only one plaque per person.

Who designed the famous blue roundel design?  The design we know today evolved over the decades and was designed by an unnamed student of the Central School of Arts and Crafts in 1938 for a fee of just four guineas. With the addition of English Heritage’s name and portcullis logo, the same design is still in use today. Each plaque is 19 inches in diameter and is hand-crafted by the artisan ceramicists, Frank and Sue Ashworth, who are based in Cornwall. 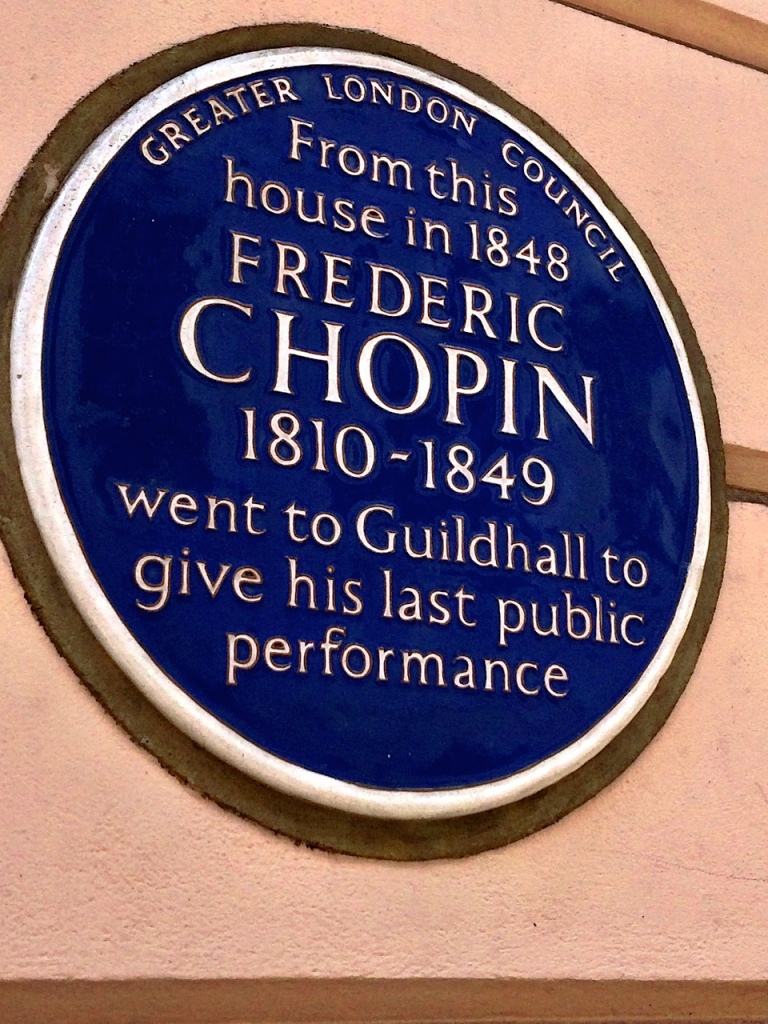 How are people nominated for a plaque? The scheme is mainly driven by us, the public, who nominate prominent individuals who have died over 20 years ago and the building that they are associated with is still standing. The current owners of said building also have to agree to hosting the plaque on their exterior walls which is, apparently, not always as straightforward as one might think.

Are all of these plaques shown here official? I believe not but it does underline the importance of maintaining the blue plaque legacy in London and shows their influence. Imitation, as they say, is the sincerest form of flattery!

Want to go onto a plaque hunt? I certainly want to and there’s either a book or an app to help us in our quest, the latter downloadable free from Google Play Store for Androids and the Apple App store for iPhones/iPads.